How Wazuh Can Improve Digital Security for Businesses 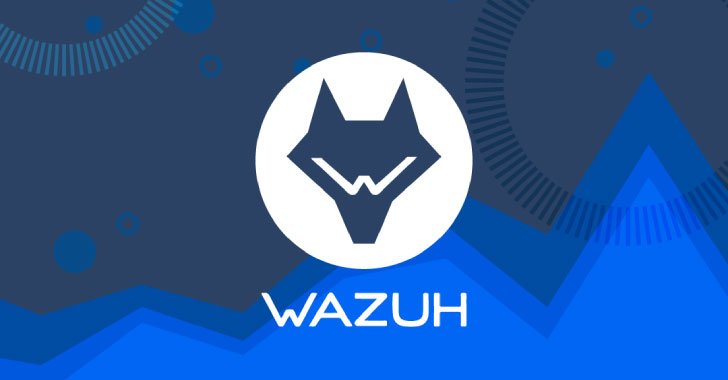 2021 was a year peppered by cyberattacks, with numerous data breaches happening. Not only that, but ransomware has also become a prominent player in the hackers’ world.

Now, more than ever, it’s important for enterprises to step up cybersecurity measures. They can do this through several pieces of technology, such as an open-source security platform like Wazuh.

Wazuh is a free and open source security platform that unifies XDR and SIEM capabilities, which not only enables companies to detect sophisticated threats, but can also help immensely in preventing data breaches and leaks from happening. As a result, it can save businesses from costly fixes that can ultimately end in their closure.

It is also possible to integrate Wazuh with a number of external services and tools. Some of them are VirusTotal, YARA, Amazon Macie, Slack, and Fortigate Firewall. Consequently, companies can improve their security against hackers from penetrating their networks.

What’s great about Wazuh is that it’s scalable, open source and free. It can compete with many high-end cybersecurity solutions that are available for a lot of money. So this can help SMEs immensely budget-wise.

Read on to find out more on how Wazuh can help with cybersecurity for businesses. 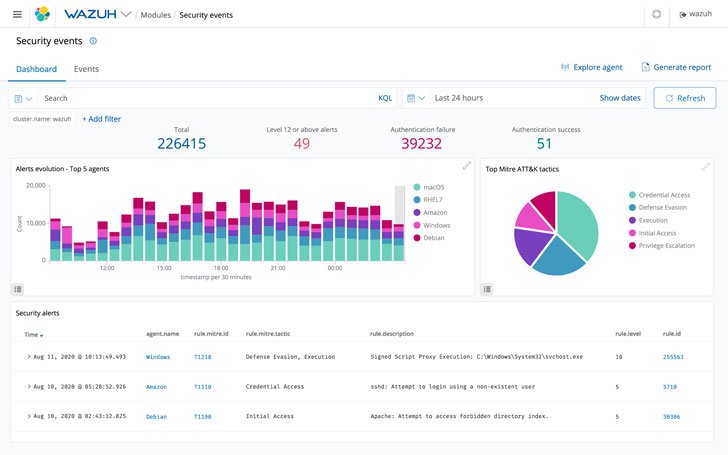 For example, Wazuh can be used in the office, as well as in cloud environments so remote workers can still reap the benefits of Wazuh. Improving digital security won’t have to be limited to just a brick-and-mortar setting.

Wazuh software has multi-platform agents that monitor systems, detect threats, and trigger automatic responses as needed. More specifically, they hone in on rootkits and malware, as well as suspicious anomalies. 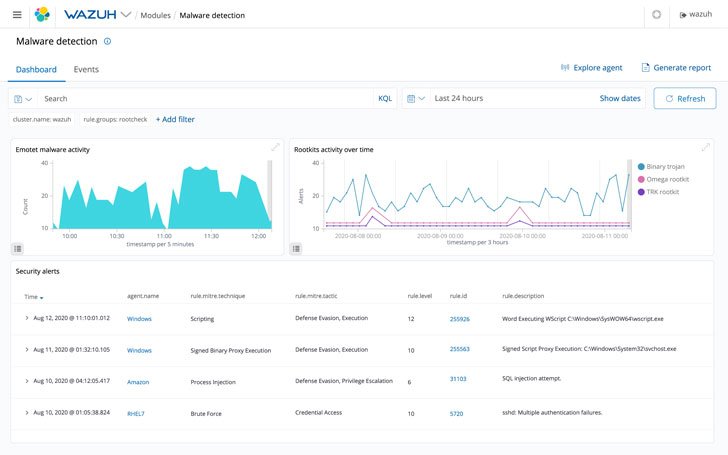 On top of these capabilities for intrusion detection, Wazuh’s server has a signature-based approach. It analyzes collected log data and can determine points of compromise by comparing them with known signatures.

This feature can immediately determine and prevent employees from downloading and installing malicious applications.

This gives workplaces a safety net. Employee education on cybersecurity should be the first line of defense, after all.

Wazuh can also pinpoint where network vulnerabilities are. This allows enterprises to find their weakest links and plug up holes before cybercriminals can exploit them first. 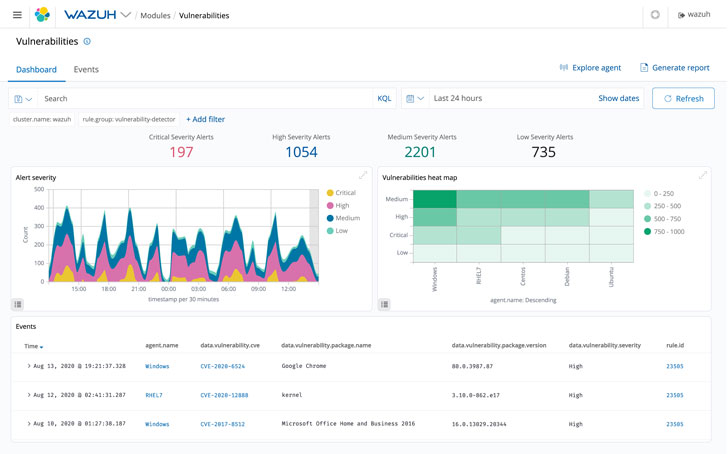 Wazuh agents will pull software inventory data and send it to their server. Here, it’s compared with continuously updated common vulnerabilities and exposure (CVE) databases. As a result, these agents will find and identify any software that’s vulnerable.

In many cases, antivirus software can take care of these vulnerabilities. These programs release security patches on a regular basis.

But in rare cases, antivirus developers won’t find vulnerabilities in time. Or they might not find them at all, which can leave businesses exposed. Having Wazuh means businesses get an extra set of eyes to ensure their cybersecurity is airtight.

Not only does Wazuh collect network data and application logs, but it also securely sends them to a central manager for rule-based analysis and storage.

This analysis of log data is based on over 3000 different rules that identify anything that has gone wrong, whether it is an outside force or user error. For example, the rules in place can detect application or system errors, policy violations, misconfigurations, as well as attempted or successful malicious activity. 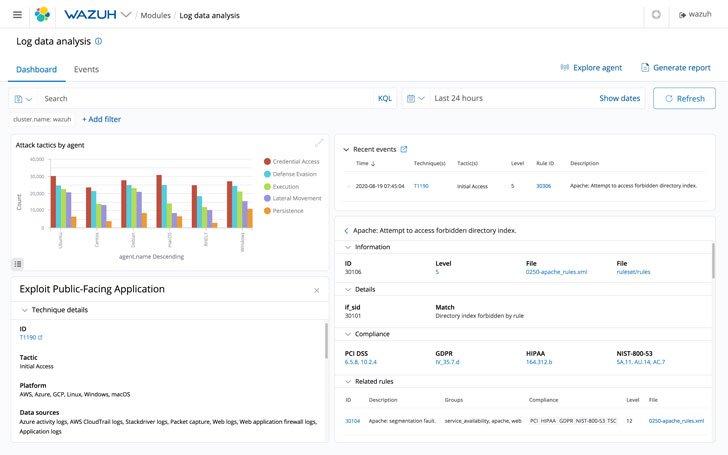 In addition, the log data analysis can pinpoint both attempted and successful malicious activities. Early detection is key in keeping networks safe.

Enterprises can learn from attempted malicious activities and upgrade their cybersecurity accordingly.

And for successful malicious activities, the system can quickly quarantine infected files. Or they can delete them before they can do more damage.

Another thing the log data analysis can show is policy violations. Whether they’re intentional or unintentional, these violations can be brought to management’s attention. Then, they can take swift action to rectify the situation.

Wazuh’s File integrity monitoring (FIM) feature can be configured to scan selected files or directories periodically and alert the user when any changes are detected. Not only does it keep track of which users create and modify files, but it also tracks which applications are used and when ownership is changed. 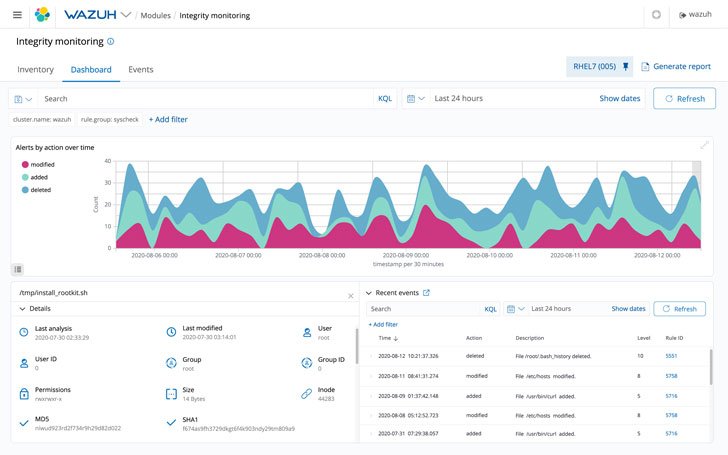 Thanks to the level of detail from file integrity monitoring, businesses will be able to know exactly when threats come in. They’ll also identify compromised hosts right away.

For instance, ransomware is now rampant, but Wazuh can help prevent and detect this threat. Should a hacker attempt phishing, the security monitoring will pick up on the malicious files that have snuck in. It will detect new files created, as well as any original files removed.

Should there be a high number of these instances, the file integrity monitoring will flag it as a possible ransomware attack. Note that custom rules should be created for this to happen.

Security compliance is essential to improve an organization’s security posture and reduce its attack surface. But it can be both time-consuming and challenging. Fortunately, Wazuh can assist with it. 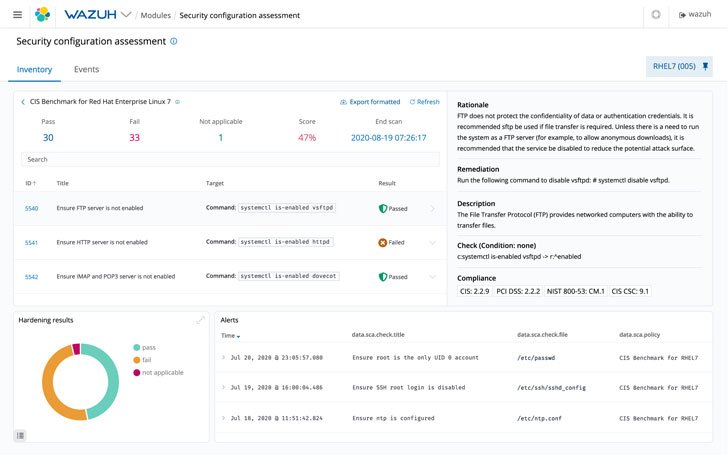 In addition, Wazuh agents also scan applications that are known to be vulnerable, unpatched or configured insecurely. That way, the strongest cybersecurity walls are up at all times.

On the topic of compliance, the regulatory compliance feature also helps users keep up with standards and regulations. More importantly, it allows businesses to scale and integrate other platforms. 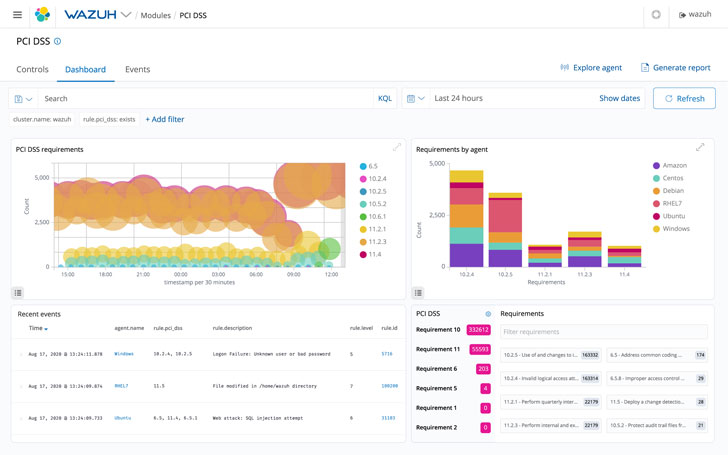 Wazuh generates reports with its web user interface. There are also multiple dashboards to enable users to manage all platforms from one place. If the agents notice anything that’s non-compliant, the users are instantly alerted.

Those in the healthcare industry can have peace of mind knowing they’re HIPAA-compliant. And for those who deal with European data, they’ll be GDPR-compliant as well.

Incident response is a very useful feature of Wazuh for active threats. There are out-of-the-box active responses, which means the user doesn’t have to do anything to set them up. Should the system detect active threats, countermeasures jump into action right away.

For example, many hackers use brute-force attacks to guess username and password combinations. Wazuh will take note of each failed authentication attempt.

With enough failures, the system will recognize them as part of a brute-force attack. Because a certain criterion is met (e.g., five failed login attempts), it will block that IP address from further attempts. This means not only can Wazuh pick up on brute-force attacks, but it can also shut them down.

Additionally, users can use it to run remote commands and system queries. They can also remotely identify indicators of compromise (IOCs).

This allows third parties to run live forensics and incident response tasks. As a result, this opens up opportunities to work with more professionals who can safeguard company data.

Today, many workplaces use the cloud to store files. This allows employees to access them from all over the world, so long as they have an internet connection. 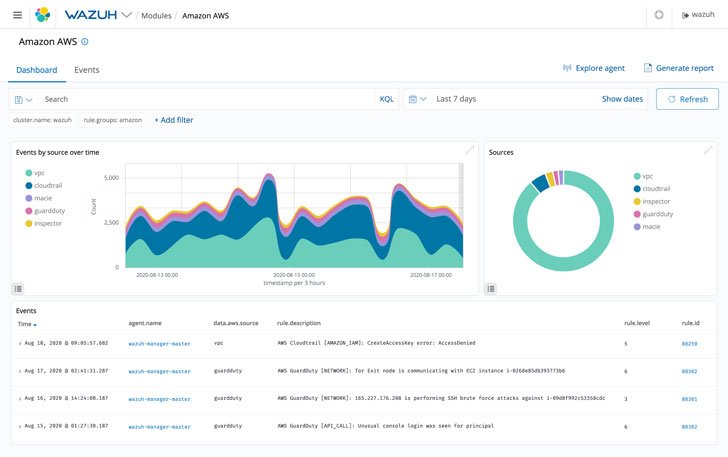 But with this convenience comes a new security concern. Anyone with an internet connection can possibly hack the cloud and gain access to sensitive data.

It works similarly to the vulnerability detection function. It will alert users to intrusion attempts, system anomalies, and unauthorized user actions.

The agent’s native integration means users don’t have to set up connections with their Docker hosts and containers. It will keep collecting and analyzing data. It will also provide users with continuous monitoring of running containers.

Wazuh is a Must for Enterprises

As the digital world keeps evolving, so do cybercriminals. Therefore, keeping up with cybersecurity measures and investing in top-of-the-line intrusion detection is essential.

Wazuh combines all of these features in a single platform, making it a powerful tool for analysts as well as a real force multiplier for overburdened IT staff.

When combined with vulnerability detection, file integrity monitoring, and configuration assessment, Wazuh can assist enterprises in staying one step ahead of hackers.

By investing time and resources into this free platform, businesses can build more layers to their cybersecurity measures. And in return, they will set themselves up for more secure networks for years to come.

Below there are several links where you can see how Wazuh can be integrated with different applications and software and how capabilities can be extended with these integrations: